The default editor in WordPress is somewhat crude. It is just a single (WYSYWIG) text area. All content is added here. Of course you can extend WordPress with custom fields or meta boxes to provide a more structured way of putting content in. You can code them by hand. Or use some plugin to do it for you. But unfortunately there is no common way of doing this.

Another way to extend the editor is by using shortcodes, like [gallery id="123"] for the default WordPress image gallery. This has always felt as a hack to me. It is not very intuitive, because you have to know the shortcode and what options you can use.

Some functionality is lacking in the current editor that is often desired by users. Tables being one prominent example. And of course there are different ways of achieving this. Writing HTML, extending the TinyMCE editor, adding a plugin that uses a shortcode.

To improve the situation the WordPress community is working on a new editor experience called Gutenberg. The biggest change is the introduction of blocks. The content can be build up using different elements to build a page. For example an image, followed by a paragraph, a table, a paragraph and so on. Some might know this concept from other content management systems like Concrete5 or Typo3. 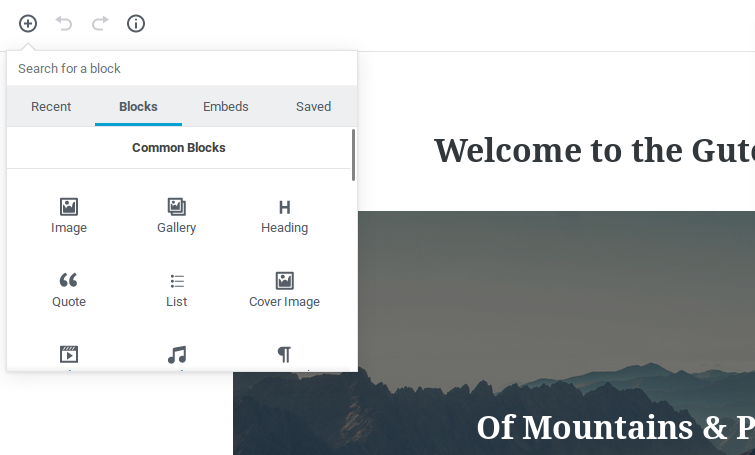 The new editor will be part of the upcoming WordPress 5.0 release, but you can already use it by installing the Gutenberg plugin. It is not recommended to use it on production web sites, because it is still being worked on. But it will arrive pretty soon. As early as April this year, if everything goes according to plan.

This will introduce a lot of standard blocks. Especially the list of embeds is quite large. If you are working on a web site with strict guidelines, typical for a large (corporate) organisation, you might want to limit the selection.

This can be done by adding some code to the functions.php. You can define which blocks are allowed, so only these will be selectable (so called whitelisting). This has the advantage that new blocks will not show up, so you will not have to update the list every time new ones are introduced.

Here is a list of the currently available block types.

If you want to know more, you can read about the extensibility of Gutenberg in the already available documentation. So install the Gutenberg plugin and get your feet wet.